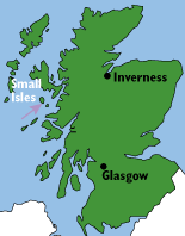 Walking for private groups on The Small Isles, on Muck in the South, on Eigg with its tooth-like Sgurr, and on mountainous Rum, one of Britain's last wildernesses.

Introduction to your private guided walking holiday on the Small Isles, Scotland 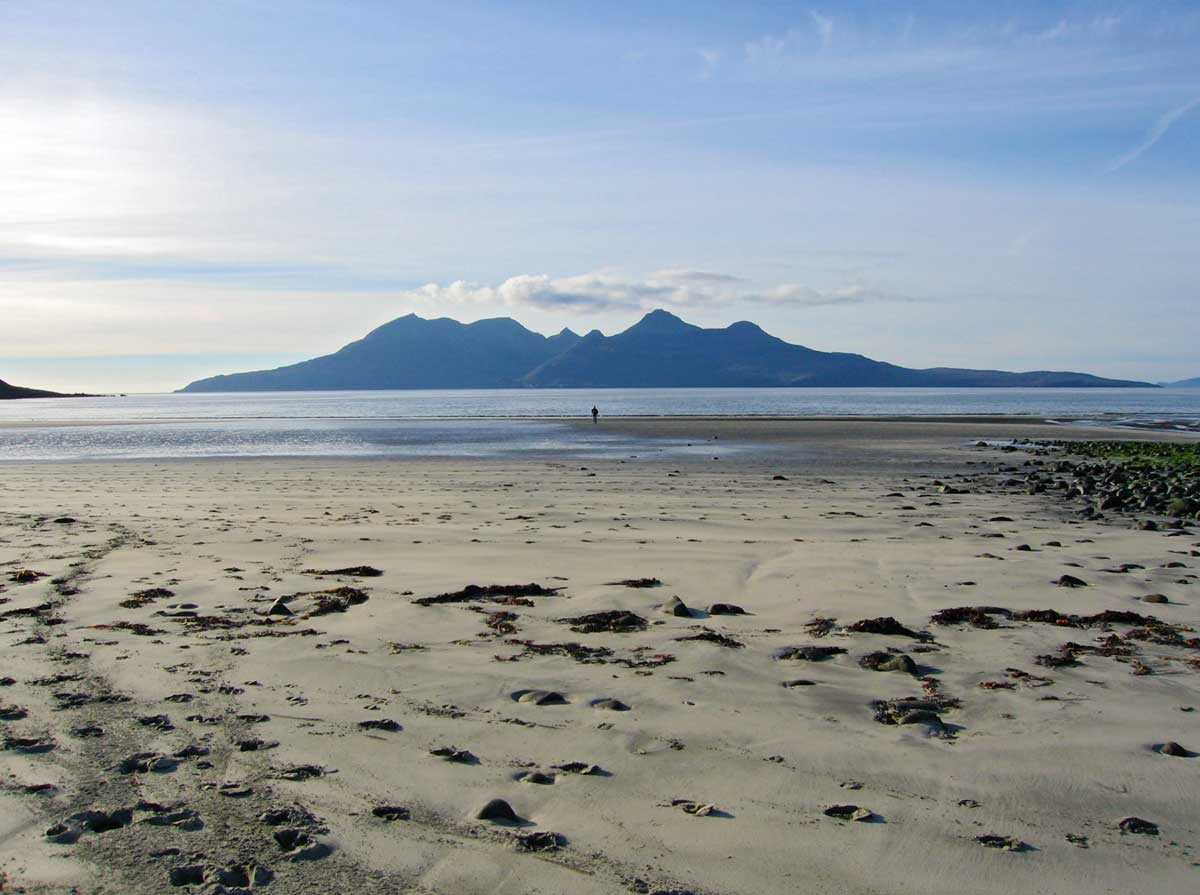 Rum from Bay of Laig, Eigg

The Small Isles are an archipelago of four little islands, Eigg, Muck, Rum and Canna, which lie to the south of the Isle of Skye. Each one is distinct and differs in geography, local economy, population and ownership. From Muck in the south, to Canna in the north, the islands offer a wonderful variety of scenery, wildlife and lifestyle. Together they have a population of around 130 people, with most of them living on Eigg.

This walking holiday takes you for hikes on three of the Small Isles: Eigg, Muck and Rum. Rum is the largest and most mountainous island. Once the core of a giant volcano, its jagged outline is one of the most famous in Scotland. Rum has been a National Nature Reserve since 1957 and it is one of Britain's last wildernesses.

Eigg is mostly made-up of a basalt plateau, 1000ft above sea level, and a great lump of columnar lava known as An Sgurr. Eigg has a fascinating, eventful history, including a lengthily feud between the Macdonalds and the Macleods that lead to the death of the island's entire population. Since 1997, the island has been owned by the Isle of Eigg Heritage Trust. The island is powered by renewable energy, a mixture of hydro, solar and wind.

Muck is the smallest, flattest and most fertile island of the group, but there is still lots to see and do for those who enjoy getting away from it all.
All the islands have a rich history, the traces of which can still be seen.

The Small Isles are of international importance for many of its plants, habitats and birdlife, including sea eagles, puffins, manx shearwaters, kittiwakes and fulmars. During our walks we may be rewarded by sightings of red deer, otters, seals, goats and eagles. Over 100,000 manx shearwaters nest in the hills of Rum. When sailing between islands we may see minke whales, basking sharks or dolphins.

The programme will be tailored to your wishes and interests, but this is an example of how the holiday may look like. 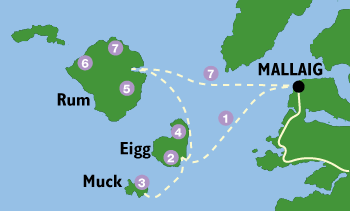 We will meet at 8am in Glasgow Queen Street Station and travel by train along the scenic West Highland line to Mallaig. From Mallaig we take the ferry to Eigg, arriving in late afternoon.
Before our evening meal we will have a short walk near our accommodation. 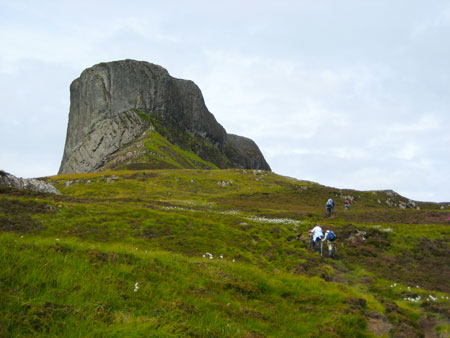 An Sgurr, Isle of Eigg

An Sgurr, (The Notch) the highest and most distinctive hill on Eigg, is the largest exposed piece of pitchstone in the UK. There are spectacular views in all directions not only from the summit, but also on the ascent.
From the top of An Squrr we descend to the west to Upper and Lower Grulin, the remains of villages deserted during the Highland Clearances.

Day 3: Caves on Eigg and the Isle of Muck

In the afternoon we take the boat to Muck, taking time on the way to see seal colonies and if we are lucky, whales and dolphins too. We have two hours to spend on Muck. The island's coastal scenery, birdlife and variety of plants and flowers are well worth seeing. 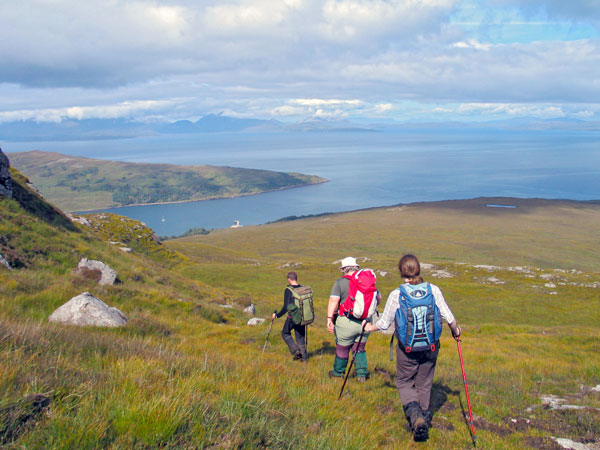 Isle of Skye from the slopes of Hallival on Rum

Day 4: Bay of Laig, Eigg and boat to Rum

We will walk to the Bay of Laig, a sandy bay lined with beautiful sandstone erosion and with the spectacular backdrop of Rum in the distance and the cliffs of Cleadale behind.

Around midday, we will take the boat to Rum where we will stay for the rest of the week.
On arrival on Rum we will have a tour of Kinloch Castle and a short walk near our accommodation.

Up to 10 miles/16km and little ascent

Our goal today is an ascent of Hallival (2372ft/723m), one of the Rum Cuillin. From Kinloch Castle we will hike through Coire Dubh onto Bealach Bairc-Mheall, the saddle between Barkeval and Hallival. The Bealach affords fantastic views of the hills beyond and down into Glen Harris with the mausoleum in the distance. We continue up the rocky slope of Hallival, which houses the world's largest manx sheerwater colony. They dig nesting burrows in the soft volcanic Peridotite, and come ashore to feed their young under the cover of total darkness in order to avoid predation.

There will be some easy scrambling to reach the top. On a bright day, the views from the top in all directions make our effort very much worth it - the mountains of the Highlands to the east, the Isle of Skye to the north, the Western Isles to the west, and Mull, Jura and the other isles of the Inner Hebrides to the south. After we have taken in the view, we descend to the east looking towards Eigg and follow the rough pony path back to Kinloch Castle. 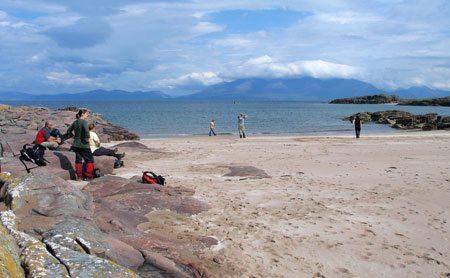 Today's walk will take us to Guirdil Bay on the west coast of the island at the bottom of Bloodstone Hill where we will be surrounded by great views to Skye, Canna, the Outer Hebrides and the mainland. Our highest point will be Fionchra (1450ft/463m).

There’s a good chance that we will see deer and feral goats along the way.

Day 7: Kilmory and journey back to Glasgow

Our walk today goes to Kilmory. This glen and its beautiful sandy bay is where the BBC Autumnwatch programme filmed their coverage of the annual deer rut. During the summer the stags are in the hills most of the time and we will probably have seen some during the walk to Guirdil Bay yesterday. In the summer Kilmory is the domain of the hinds and their calves. The red deer in this part of Rum have been researched for more than 50 years and they are never culled, making it possible to get quite close to them.

We will take the late afternoon ferry back to Mallaig and from there we will travel back to Glasgow by minibus, arriving in Glasgow in the late evening. 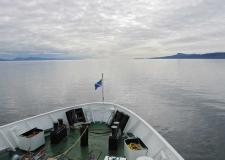 On the ferry to Eigg 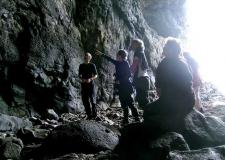 Isle of Rum from Isle of Eigg 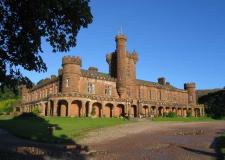 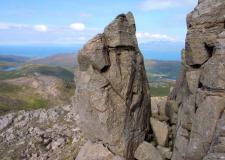 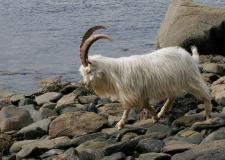